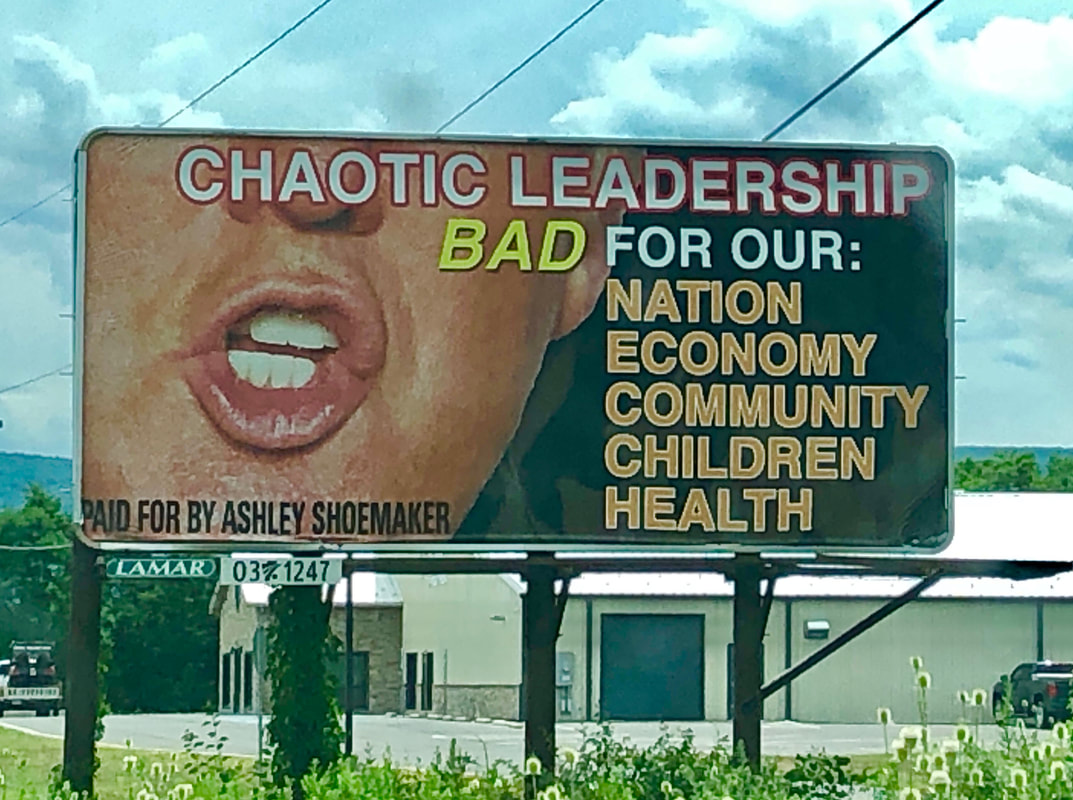 These billboards were designed in collaboration with Brick Shoemaker and located in spots along commuter highways in central PA during the run up to the 2020 election. Pics and additional input by Samara Halperin. This one went up in Allenwood in July 2020. 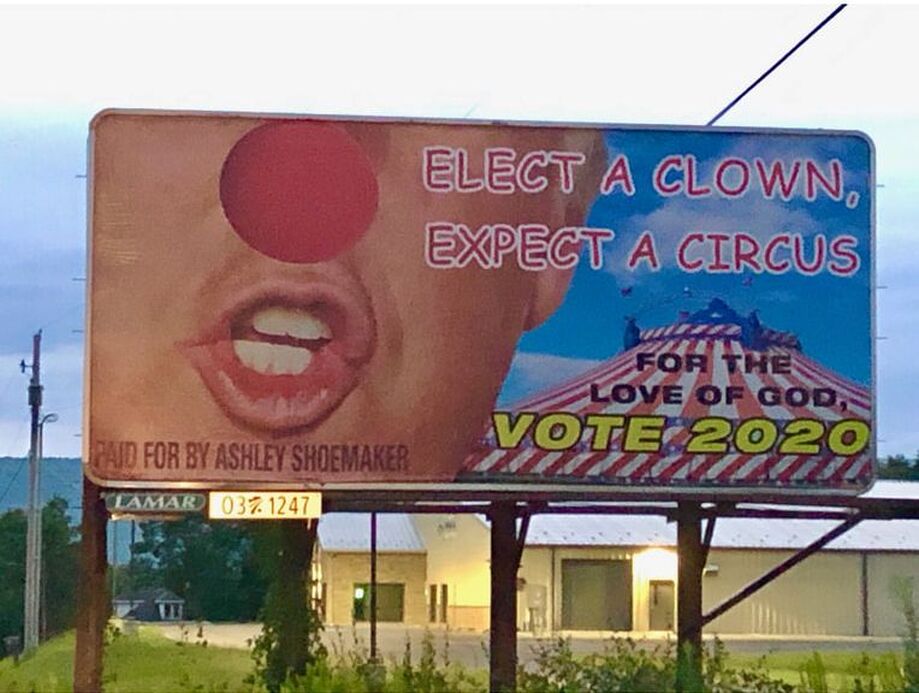 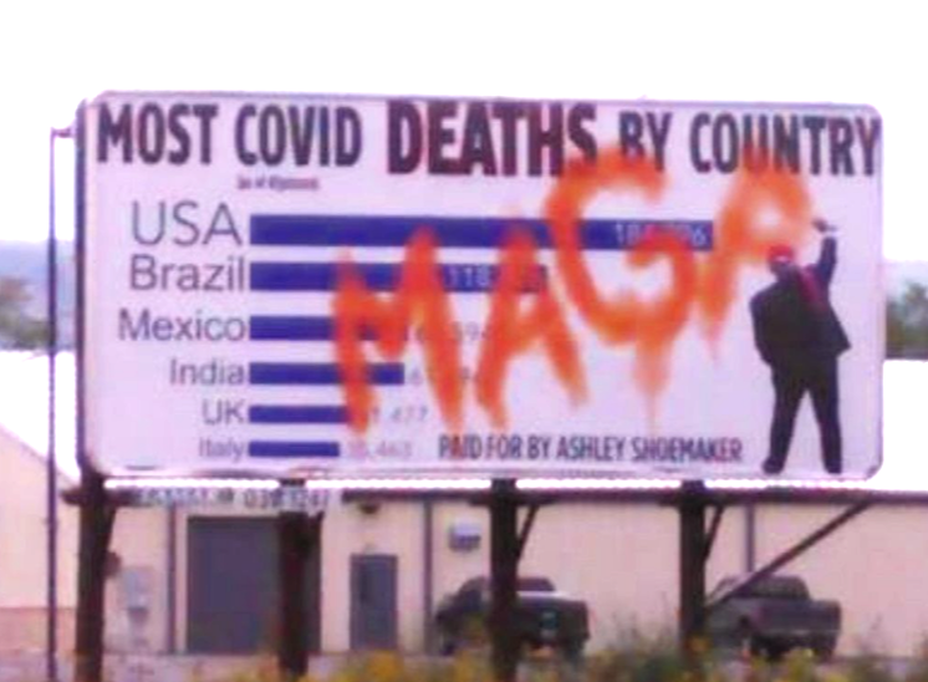 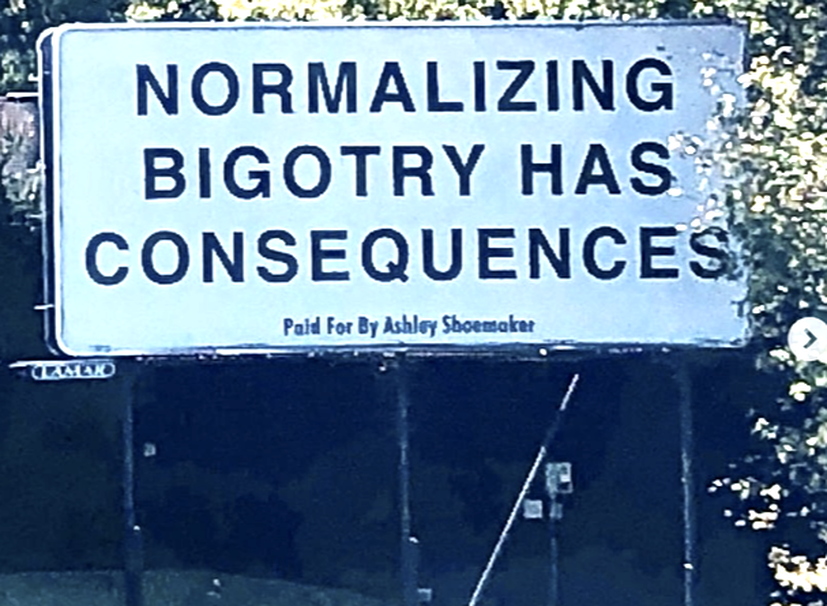 This 16' mural was painted during the summer of 2020 with Brick Shoemaker and Samara Halperin out of latex paint and watercolor on paper as a potential billboard design. We ultimately opted not to use it in favor of more compelling and less didactic messaging but it was great group therapy for the last days of MAGA.
After quarantining in my central PA hometown for several months, my crew and i decided to pushback against the sea of MAGA mayhem in this area and rent a billboard to fill with anti-trump messaging!  Its a good way to reach beyond our normal echo chambers and in a small town like this will cost around $1000/mo. And the impact is broad.

Id like to encourage folks reading this to consider filling up some roadside real estate with a message you want to amplify. It doesnt have to be in the town youre in. Google can connect u to any small town billboard company in america. Some are even cheaper than here. And the process is easy! (read below for the how-to guide i made which will walk you through the process.)
Id love to see more of the ideas that are shared on our insular social media platforms sent out to places and people that might really need to see it.

Here’s our thoughts on strategy:
At first I imagined this billboard to be a loud fuck you to trump and all his supporters in the area.  Then we determined our goal was to convince AS MANY PEOPLE AS POSSIBLE TO VOTE AGAINST TRUMP IN NOVEMBER.
We started talking to family friends and trump supporters in the area about what moves them (to vote/not vote/who they vote for/why they find an ad compelling or unconvincing.)

some take-aways are: A LOT OF PEOPLE ONLY WATCH FOX NEWS and boy is that scary, trump boomers are basically voting with their pocketbooks, people are distrustful of ads that seem too slick or of the “political machine”,  ads targeting emotion/morality were compelling to democrats but not so much republicans, apparently trump voters dont believe anything they dont “see with their own eyes” aka on fox news— one former republican now trump supporter in my family said the only way he would consider not voting for trump was if it “came out that he was a liar or cheater”. !!!!!

Diehard trump fans won’t be convinced of anything by us. This billboard is for those who might vote for him out of perceived “pragmatism” and self-interest.  We intentionally avoided issues that might be dismissed offhand as democrat or republican and aimed at what they can “see with their own eyes” (aka our country is a dumpster fire, the economy is suffering, people are rioting in the streets, school might be canceled, 150k are dead, etc).  Its honestly very different from what I thought it would be but I hope its more effective!
We also think the gaping sphincter of his mouth is viscerally effective as it appears in the distance lol.

Please let me know what you think! We’re especially interested in what y’all think should go up on the September billboard!  Our plan is to have the messages become increasingly fuck trump/progressive and in October it will be this giant painting we are working on which is a republican hellscape/ family art project with attached website!

Please consider making a billboard of your own.  I'd love to see what you come up with! And you are welcome to use our image (above) if youd like to!  I'll add more as we finalize designs!

you can also donate to our billboard project which will be put directly into renting more anti-trump signs:
venmo  @SilkyShoemaker or paypal: gladhander@gmail.com (put billboard in the subject) 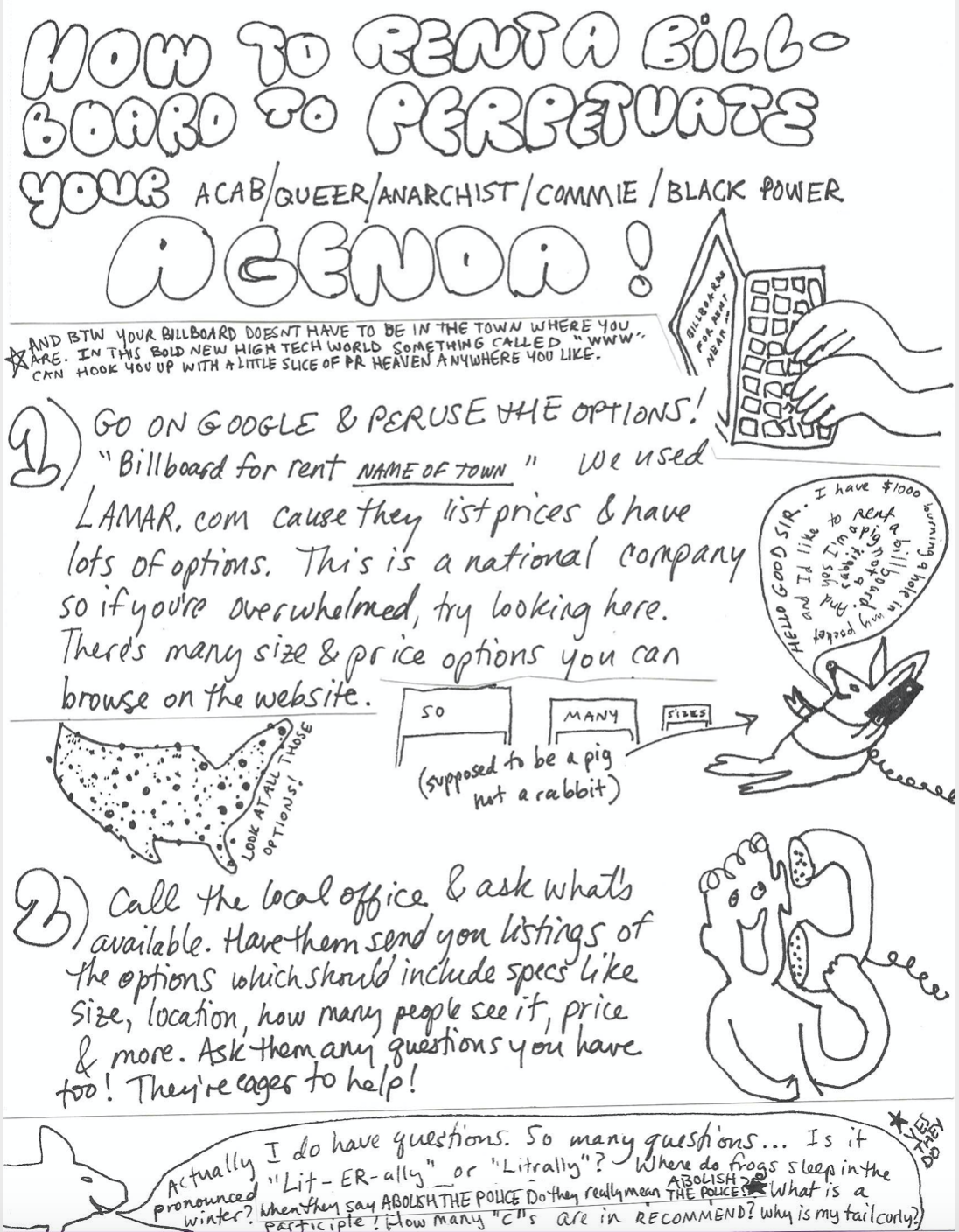 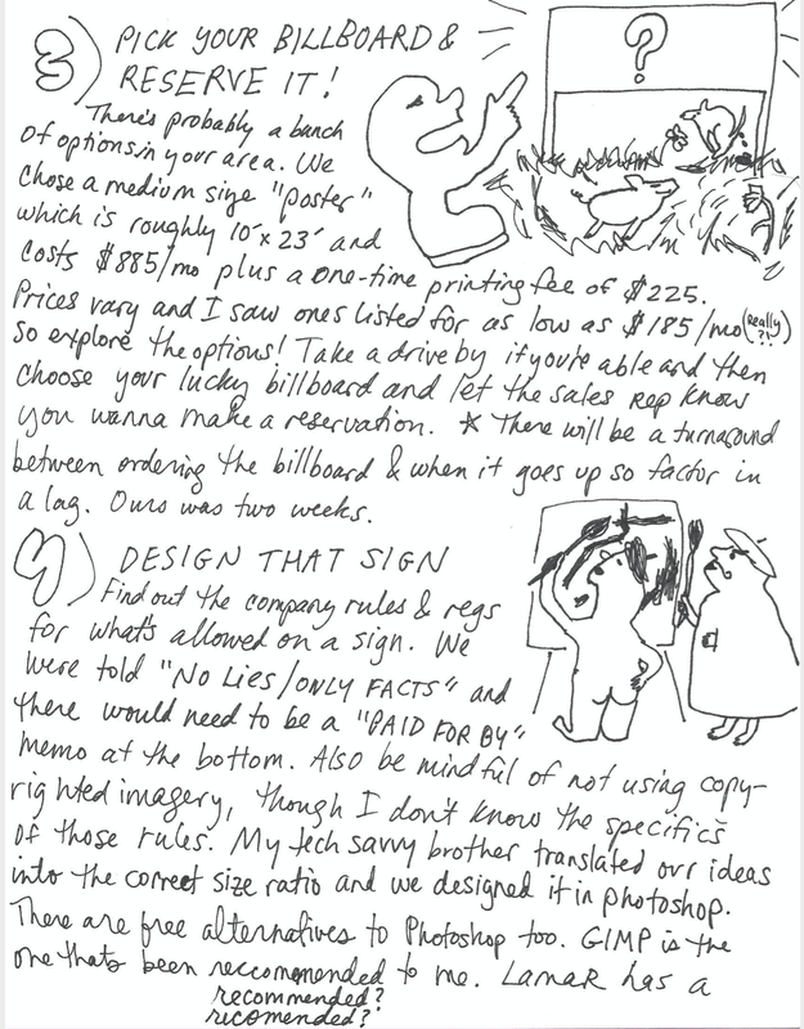 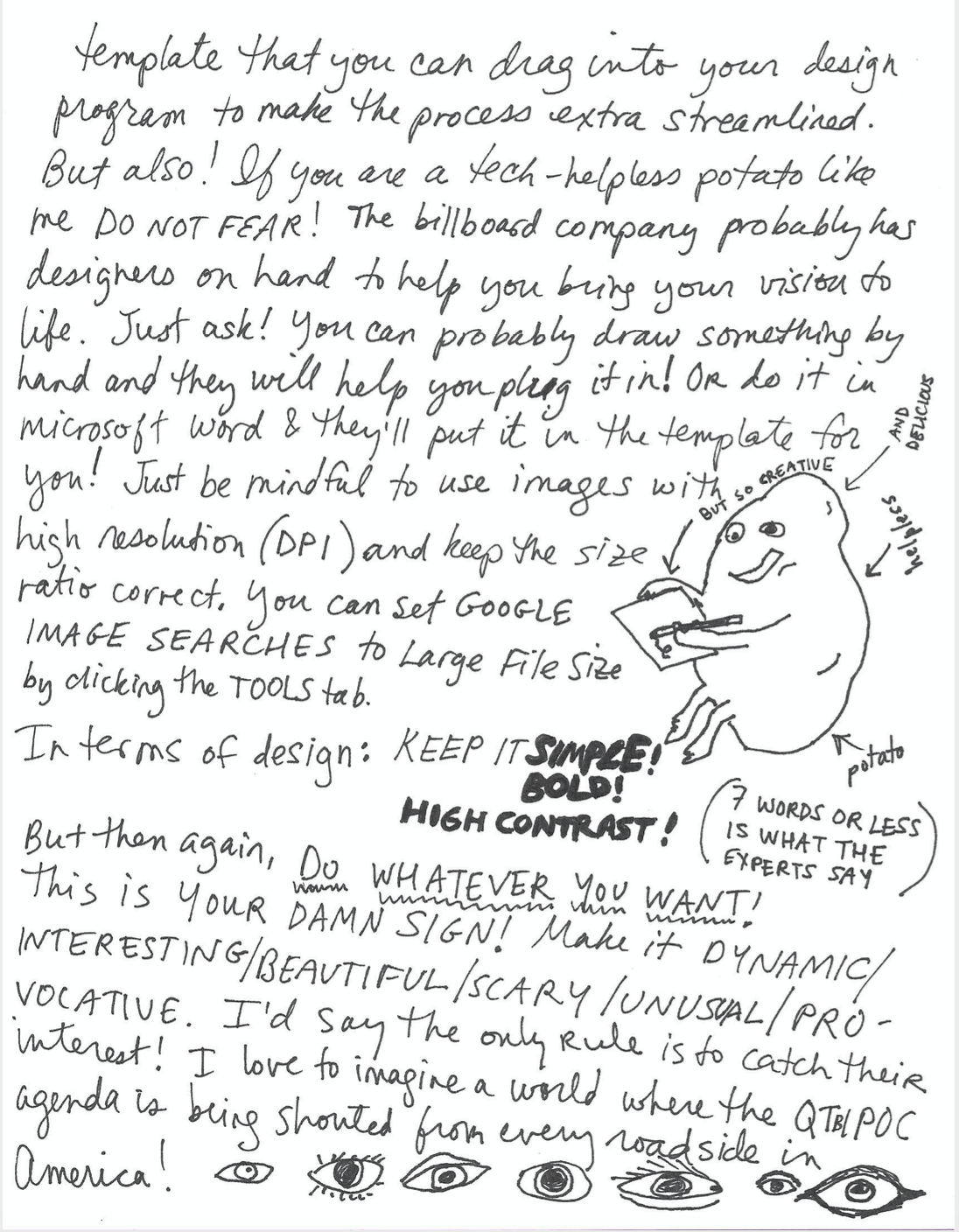 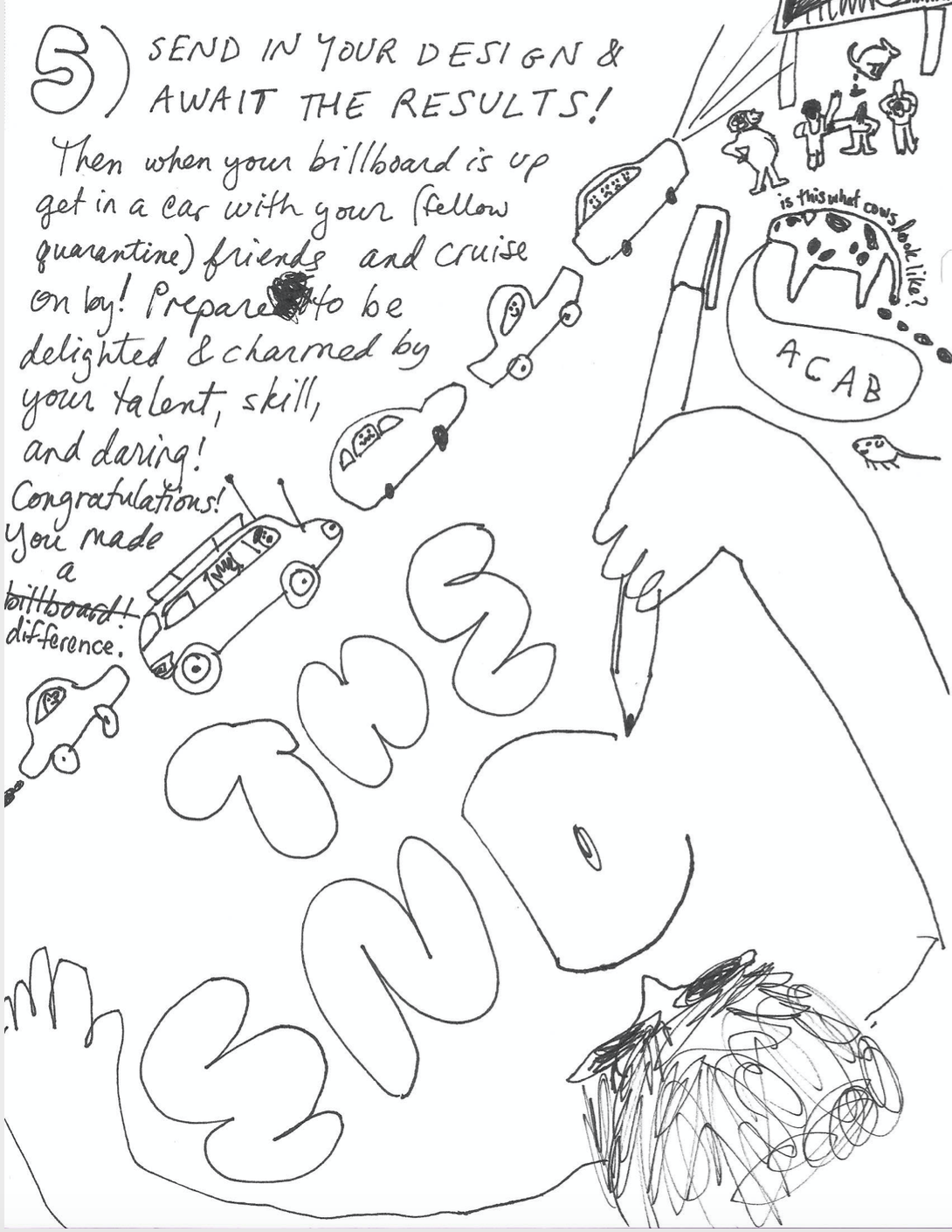